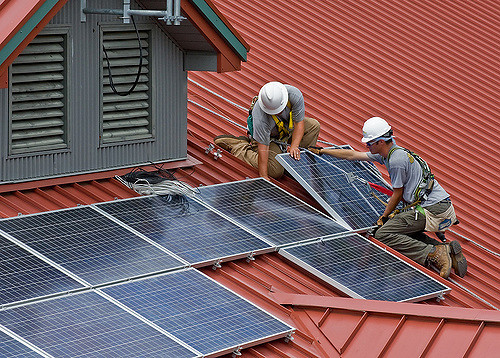 The cost of putting a solar energy system on your roof has decreased by two thirds in less than a decade. This means that getting power from the sun can be significantly cheaper than buying it from your local utility. However, investing in solar does more than lower your monthly bill—it creates jobs, reduces your carbon footprint, and reduces local air pollution. Though energy from the sun is free, home and building owners need a way to capture the rays. The energy is most often captured by solar PV systems; the one-time up-front cost can be intimidating (often more than $10,000). There are three primary ways to finance solar installations: leases, Power and Purchase Agreement (PPAs), and Loans.

Solar leasing employs a third-party ownership model; a company will often install a solar system on your roof for no money down. However, the homeowner agrees to make fixed, monthly payments to the company for 15 to 25 years. Though the company owns the solar panels on the roof, the homeowner gets all the electricity created by the system. This value is usually worth more than the monthly payments. Additionally, if you do not utilize all the energy generated by your solar panel, it is returned to the grid, and your utility will add an additional credit to your bill. However, the solar panel provider claims all state and federal incentives, using them to cover the cost of the equipment and installation. This is an excellent solution for those who do not want to pay a down payment, but most leases are structured to increase monthly payments each year.

A Power Purchase Agreement (PPA) is another popular solar financing model. Similar to leases, a provider will install, manage, and maintain a solar system for no money down. However, rather than paying a monthly rate to rent the system, the homeowner pays for the energy generated at a fixed cost per kilowatt. There is no real change from current and popular methods of energy payment, but the price per kilowatt is generally less than what the local utility charges. Since you only pay a per kilowatt price, it is easier to calculate how much money you stand to save. However, there is no guarantee that you will have any financial savings in this model and beware of escalator clauses which will increase your payment over time. The solar company receives all rebates and tax incentives.

Loans are becoming an increasingly popular way to finance solar systems. Loans allow homeowners to own the panels on their roofs, which means they can utilize a greater share of the long-term financial benefits a solar system generates. Additionally, unlike rates with PPAs and leases, your rate will not increase over time. There is a range of loan options available depending on your current and future financial situation. However, as with all loans, the homeowners must calculate how much money they need to borrow and how fast they would like to pay it back.